Testimonial from Annie: Looking Back on Lobitos

I can’t believe it’s been three years! Reece and I were off on a year-long, break-from-work trip around the world. We were free radicals exploring far, catching waves and volunteering along the way, with only our backpacks and each other. While we were drinking up every drop of freedom on the open road, we were missing our community at home and that sense of purpose and belonging—that’s exactly what we found in our two weeks with WAVES, and it’s a feeling that’s resonated with us since.

In Lobitos, there’s a stark contrast between the terrain and the vibrant community. Landing there was like arriving on the moon—it was dry, desertous, and craggy. The streets were quiet, homes sun-burnt, and the only movement in town was the eery churn of oil pumps in the distance and the occasional street dog. Once we rolled up to the WAVES house, we saw (literally) where the party was, and we stepped out of the car right into the open arms of strangers.

Volunteers were in the midst of planting new trees in the dry packed soil in front of the waves house and inside, the living room was jamming with kids squealing with laughter as a clown clopped around—it was a birthday party for one of the kids. We got to see over the next two weeks how the WAVES house was an oasis in town—the door was (literally) always open to the kids. 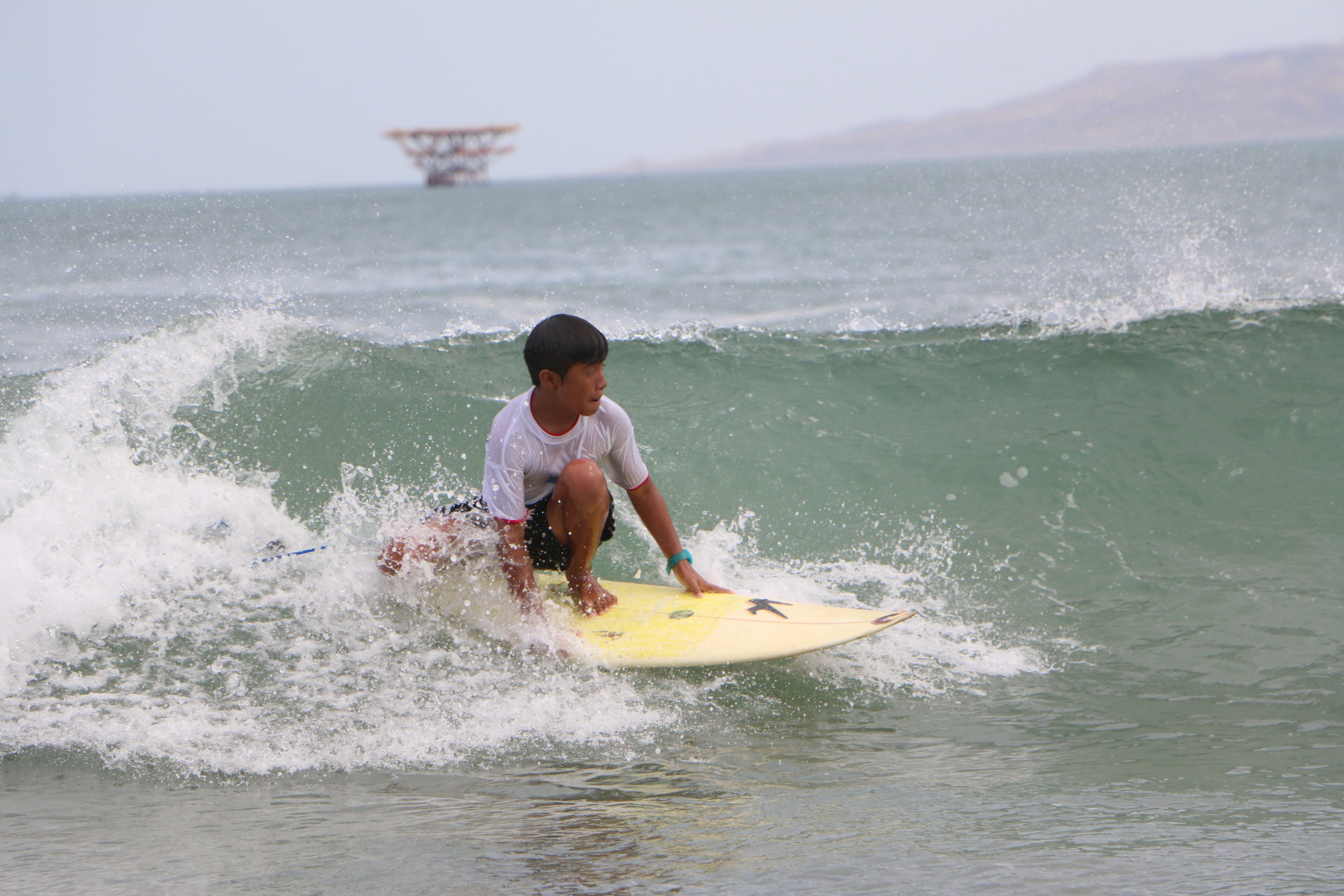 With mediocre Spanish, we quickly tapped into the programs we could help out with most: swim and surf lessons, and painting anything that needed a fresh coat. We supported the long-term volunteers who could magically whip up classes for a room-full of kids (and sometimes adults). Small moments stick with me today: a tiny little girl standing in front of the classroom to say “I lerv the sand” to proudly proclaim why she loves the ocean in a new language; a girl conquering her fears to catch her first wave (in terror and delight) amongst all the boys; a little one in goggles so enthralled with everything under water she’d just barely come up for air; and the tiniest boy mustering up the confidence to join the older boys in the pool. It’s these little things that stick with me because it’s the little things (a lesson plan, a push into a wave, a pair of goggles, a wetsuit) that WAVES provides that are so important and can change the trajectory of someone’s life. As Obama said, “Sometimes the most important changes start in small places.”

Our stint was short, and we felt we could’ve had a greater impact had we stayed longer… but our travel itinerary called. Nonetheless, the WAVES crew sent us off with a dinner and cake! We didn’t feel worthy, but our hearts were warmed. I think we took away more from the experience than we left, thankful we got to spend time with such a kind group of international and local folks in the resilient and colorful community of Lobitos. Oh, and we caught plenty of waves while we were there too!

Since traveling, we got married and nestled back into NY, not long before migrating to the west coast for work. Reece and I found jobs in the surf industry, respectively at the World Surf League and the sustainable clothing brand Outerknown. Memories of Lobitos bubble up often, and whether we’re tackling projects at work or pushing for change in our community, we apply what we learned in Lobitos: get everyone’s heart in the same place, work together, and catch some waves too!